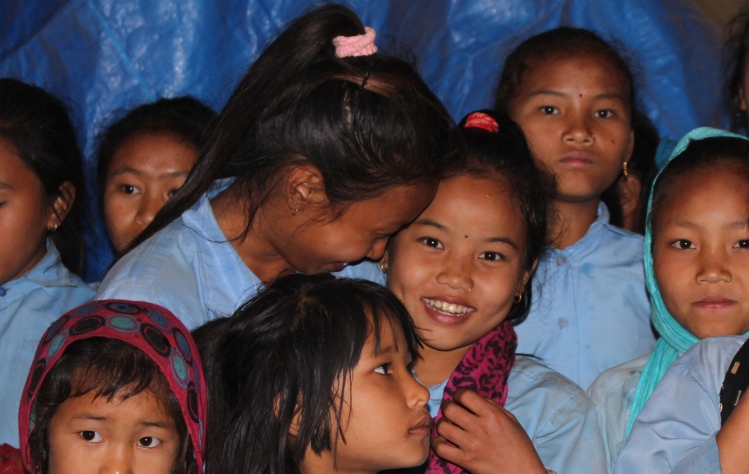 Author’s note: The second part of this story reminds us that, even after the most terrible of disasters, we can find hope and healing. I hold onto this as we count the losses of the most recent series of tragedies we are enduring.

The morning after we received the Kumari’s blessing, my daughter and I set out to visit the epicenter of the massive earthquake that struck Nepal on April 25, 2015.  The memory of the Kumari’s gaze calmed me as we sat in traffic making our way out of Kathmandu.

Over 8,000 people lost their lives and approximately three times that number were injured in the earthquake.   It occurred during the middle of the day and on a weekend, so children were not in school and adults were out working in the fields.  Had the earthquake occurred at night or on a weekday when school was in session, the casualties would have been many times what they were.

Nonetheless over 3.5 million people were left homeless.  A year later, the situation continued to be dire.   Home rebuilding was stalled due to the government’s inability to issue rebuilding permits.  Caught in bureaucratic limbo, people remained in damaged homes or tents.

Given the stalled home rebuilding, Episcopal Relief & Development decided to focus its resources on urgent water and sanitation challenges.

The earthquake had disrupted the underground sources of water and wells that had supplied communities for generations were suddenly dry, leaving entire villages without water.  The terrain and remote locations of many villages made drilling new wells impractical.  As old sources of water had dried up, new fresh water springs emerged where they had never been before.  So, we invested in providing cisterns, pumps, and piping to bring potable water to communities throughout the foothills of the Himalayas.

The earthquake had also destroyed latrines.  This was particularly acute at the schools and therefore a major impediment to the education of girls.  Latrines are important because if there are no safe, private, and sanitary bathrooms for girls to use, parents keep their daughters at home.  By ensuring that schools are equipped with proper latrines, Episcopal Relief & Development is able to remove a major impediment to girls’ education.

Throughout our site visits my mind would wander back to the Kumari.  As I watched young girls sitting by their mothers preparing meals, I wondered if any of them were candidates to be the next Kumari.  What was it that would reveal itself in a young girl causing her to be singled out as divine?

As I turned that question over in my mind, I realized that I had it backward.  The divine is present in each and every one of us.  What child could not be seen as divine?  Why else would we come here to provide clean water and safe latrines, if not to honor the divine in those we serve?

The Kumari’s blessing, powerful as many feel it is, pales in comparison to the blessing derived from being in service to each other.

Episcopalians recite the Baptismal Covenant each time a new member is baptized into the faith.  We make the promise to “seek and serve Christ in all persons.”  In other words, we recognize the divine in those around us.  Each of us is a kind of Living Goddess or God, Kumari or Kumar.

And with that divinity we can bless each other through service, bringing hope and healing.