Last week, I explored the role that God plays in the lives of four of the five 30-something Orthodox Jewish Jerusalemites in the Israeli television series Srugim. 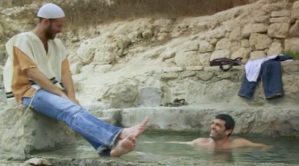 This week, we learn what the angel that God sends to Amir has to say.

On the eve of his wedding to Yifat (long story), Amir is at a spring with Nati for a cleansing ritual.  Suddenly, beside the spring, a man dressed in white appears out of nowhere.  This man, who I take to be an angel, has a message for Amir from God.

As Amir’s head pops out of the water, the man’s first words to Amir are “Peace be upon you, righteous one.”

The angel goes on to tell him that all of his sins are forgiven and then advises him to ask: “What does God want of me?”

Amir dutifully asks and the man says: “God wants you to be happy.”

He goes on to tell Amir that marriage isn’t always easy and that all couples have their ups and downs, but that God wants him to be happy always.

In a later episode when Amir and Yifat are struggling in their relationship, Amir returns to the spring.  There he encounters the man who again appears out of nowhere, as an angel would.

Amir tells him about his despair that his relationship with Yifat seems to be failing.  He loves her, but they are living as roommates, he reveals.  He is heartbroken that they’ve not yet been able to conceive a child, despite all kinds of intrusive medical interventions.  He is losing faith in himself and their relationship.

After a few moments of silence, the man replies: “God loves you, Amir.  That’s worth everything.  All your suffering, all your sadness has a purpose.  Every person has a purpose.  And your destiny is to fall down and get up again.  Fall down and get up again…  A good father doesn’t let his son exert himself, to try, to make an effort, to fail, to try over and over again.  He knows you better than anyone.  He knows you can endure the test.  He knows that what you’ve attained through suffering is much sweeter.  So be glad.  Be glad that God Almighty has given you such a great purpose.  Be happy.  Happiness opens heaven’s gates.”

Amir dismisses the man’s advice.  “What should I be happy about?  It’s easy for you to talk, living here near your spring.”

Amir submerges himself in the water, several times, staying under and holding his breath.  When he emerges, the man is laughing.  At first Amir feels that he is being mocked, and then slowly he realizes that he is being invited to laugh as well.

“Smile!” the man commands, and Amir is transformed.

The man disappears just as suddenly as he had appeared.  Amir gets out of the water and puts his clothes back on. His heart is light.  He makes his way back to Jerusalem to reconcile with Yifat.

So, much to my surprise and when I least expected it, I encountered God while binge watching. You never know.