Each year my wife and I attend St. Bartholomew’s three-hour Good Friday service.  Each year I wonder how on earth I will sit through three hours of music, extended periods of silent prayer, readings on the seven last words of Christ, and a homily on each.  Each year the time disappears.

Oddly enough, it is also about the only time my wife and I switch sides of the church and sit on the pulpit side, rather than the lectern side.  It’s a small detail but somehow sitting in an unfamiliar seat heightens the overall impact of the service.

This year we were particularly blessed to have three of our seminarians, all just recently ordained to the transitional diaconate, preach.  Their homilies were brilliant and riveting. The Episcopal Church is lucky to have such gifted young priests in the pipeline.

I’ll spare you the précis, and cut to the chase.

What each one did, in his or her own way, was convey the essence of God’s message to each of us, as spoken through Christ’s seven last words.  Each did it with insight, beauty, and powerfully moving authenticity.

Oddly enough, during our family retreat in Ohio just before Holy Week, on my way to the grocery store, I came across this very same message posted on a billboard. 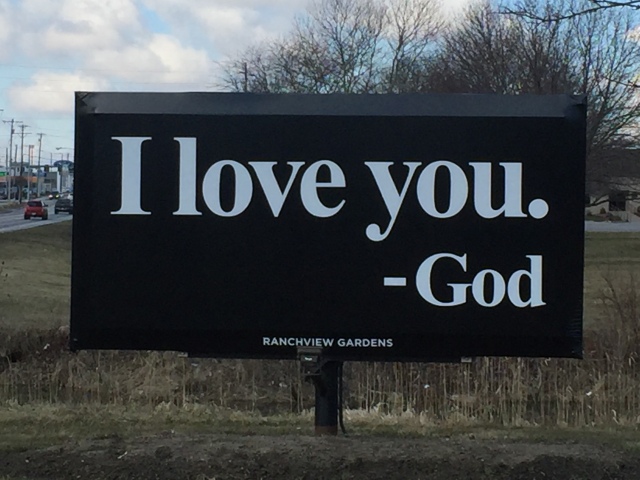 At the time I will confess to snickering a bit at the public display of piety.  I’ve reconsidered that less than generous stance towards the person or people who put up the billboard.   They have a point. Correction. They have THE point.

It’s a message that’s worth remembering throughout the year.  Not just Holy Week and Easter.

One thought on “One billboard outside Sandusky, Ohio”