Living as I do in an urban environment, it is not usually possible to see many, if any, stars on a regular basis.  Fortunately, my work takes me off the beaten path to places where there is little ambient light to obscure the night sky.

Most recently, I found myself in the desert of New Mexico at the Benedictine Abbey of Christ in the Desert on a silent retreat.  There, after the sun had set, the heavens blazed. 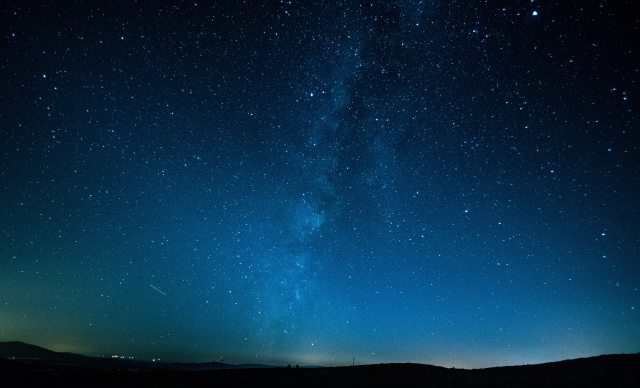 The first time I really remember looking at the stars was as a child on an ocean crossing.  I was seven, going on eight. My brother, sister, and I were the only children on a freighter traveling to Africa and one of the officers would take me onto the deck after dinner and point out the various constellations and patterns of stars.

If I recall correctly, we started with the twelve zodiac signs.  I don’t imagine that we could see all of them, but I remember being stunned by the complexity of the patterns the stars made.

More recently, as I stood in the desert of New Mexico and stared into the early evening sky, the planets were what caught my attention.

I’m not a practiced stargazer, so I relied on an app I downloaded onto my phone to identify the planets and constellations.  Jupiter, Mars and Saturn all floated above me and, as the last glow of the sun’s light faded, the stars began to emerge, joining the planets.  I was mesmerized by the sky’s transformation.

Since ancient times, humans have looked up into the sky at night and tried to make sense of them, pondering their meaning and searching for an understanding of our place in the universe.

We’ve not been humble about putting ourselves at the center of the stories we tell ourselves about the universe and our place in it.  Yet, the longer I live, the more I am convinced that we’ve overstated our collective importance. A moment’s glance at the night sky begs the question: who or what is glancing back at Earth and what do they see?

Moreover, we’ve not been good stewards of our small piece of the universe.  I’m pretty sure that the bill will come due and it will be rather sooner than we think or are prepared for.

It isn’t used very much, but Eucharistic Prayer C in the Episcopal Church’s Book of Common Prayer has always moved me.  In particular its opening passage:

At your command all things came to be: the vast expanse of
interstellar space, galaxies, suns, the planets in their courses,
and this fragile earth, our island home.

The prayer goes on to recite how we have betrayed God’s trust by how we have treated God and each other.  It’s hard to argue with that. We have also betrayed our island home.

God, as the prayer tells us, calls us back and forgives us.  This is a God of second, third and fourth chances.

Will our island home be so forgiving?